First off, we had the leak of Donald Trump’s tax returns which gave an insight into the murky world of tax ‘avoidance’ and showed him paying a paltry $750.00 in annual taxes. As if that was not enough it was also revealed that his Trump Organisation is in hundreds of millions of dollars in debt to various sources – some of which are shrouded in mystery. His campaign attempted to deflect by focusing on their nomination of Amy Coney Barret for the vacant supreme court justice seat which has become available with the passing of the great Ruth Bader Ginsburg but this scandal was simply music to the ears of the Biden Campaign and mainstream media who have long demanded Trump to release his taxes. Biden 1-0 Trump.

But just as the story was gaining some serious momentum, boom, both Trump & Melania were stricken down with Coronavirus. Half the nation prayed for their president while the other half scoffed at his reckless anti-mask attitude and many even wished for his death. He was admitted to Walter Reed hospital and used his time there to portray a vibrant man unfazed and unstoppable, even by Covid-19. He returned to full health in a matter of days. Virus or no virus, it worked, the tax returns story was buried. Biden 1-1 Trump. 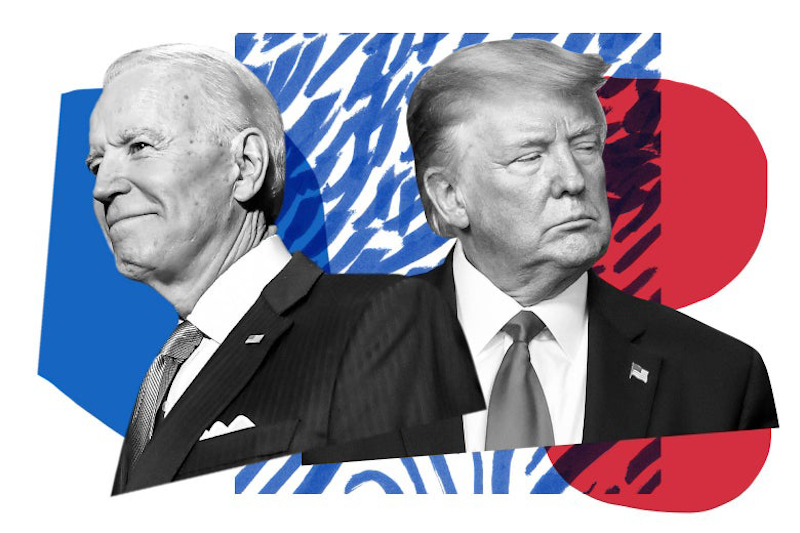 After Trump’s triumphant return to the White House post-Covid, him & his campaign very quickly sprung into offense. Trump’s lawyer and former mayor of New York, Rudy Giuliani, blew this election cycle into orbit with the publication of a New York Post article. America’s Mayor had sent the hard drive of a laptop owned by Joe Biden’s son, Hunter to the New York Post and their article contained bombshell after bombshell about the Biden family and their various ties to corruption. The Trump campaign have been attacking the Biden’s over Hunter and his business dealings for years. In particular, his position on the board at Burisma Holdings (a Ukrainian oil company) while Joe Biden served as Vice President to Barack Obama. Hunter’s $183,000 per month role at a company and in an industry with which he had zero experience has stunk of corruption for a long time but it paled in comparison to this unearthed laptop, which had been left at a computer repair store in Delaware. The content pieced together a trail of pay for play deals, bribery scandals and finally shed light on Joe Biden’s role as the head of this highly organised money making enterprise. Emails, text messages and wire transfers for massive amounts of money point to the Biden’s making millions of dollars in exchange for influence and access. We are talking Russia, Ukraine, Kazakhstan, and China all possibly compromising the US Vice President. It is groundbreaking stuff along with other sensitive material on the laptop including Hunter Biden smoking crack. Biden 1-2 Trump. 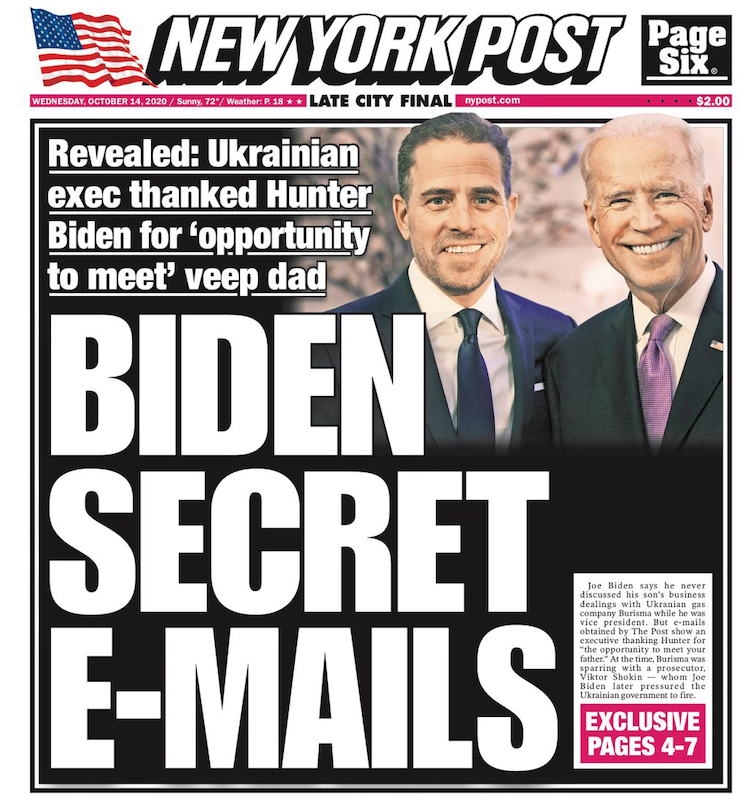 So, the scandal of scandals had been brought to light. Giuliani himself, the 9/11 mayor, had given mainstream media the gift of verifiable corruption at the highest level’s government. Was this the biggest October Surprise ever? Well, no, not when people do not get to see it. Big Tech, in the form of Facebook, Twitter & Youtube, took the outrageous step to effectively censor the New York Post story and blocked it from being shared on their platforms. The New York Post twitter account is still, at the time of writing, blocked from posting content until they delete the article. The White House press secretary, Kayleigh McEnany, was also blocked from Twitter. The New York Post is the 4th largest newspaper in America, it is not some fringe publication spreading conspiracy theories. This censorship was big. This is truly Orwellian in its nature. In this column, I recently discussed the nefarious role of Big Tech, censorship, their control over the flow of information and the risks it poses to citizens, but the action taken stunned even myself. This censorship, however, has turned out to be a surprise in itself and rather than helping the Biden campaign (which was their goal), the article has now reached a wider audience amidst the backlash to what many folks see as election interference. It all plays perfectly into Trump’s rhetoric about fake news and the media being ‘the enemy of the people’. While the heads of Facebook and Twitter will be called to testify in front of the senate judiciary committee to explain their gestapo like tactics. Have your popcorn at the ready! Biden 1-3 Trump.

Wild stuff so far but we are not done yet. Trumps lawyer (again!), Mayor Rudy Giuliani, was caught up in his very own sex scandal at a New York hotel with an actress posing as a 15-year-old girl for the upcoming blockbuster movie Borat 2. In the movie, Borat (played by Sacha Baron Cohen) arranges an interview between Giuliani and actress Maria Bakalova. Hidden cameras watch as after the interview, Giuliani appears to lay on the bed with his hand in his pants before Borat bursts into the room screaming ‘Stop!’ She is only 15!’. America’s Mayor rejected the claims and insisted he was adjusting his microphone, but the smear definitely gave the media something to talk about instead of the New York Post article! Biden 2-3 Trump. 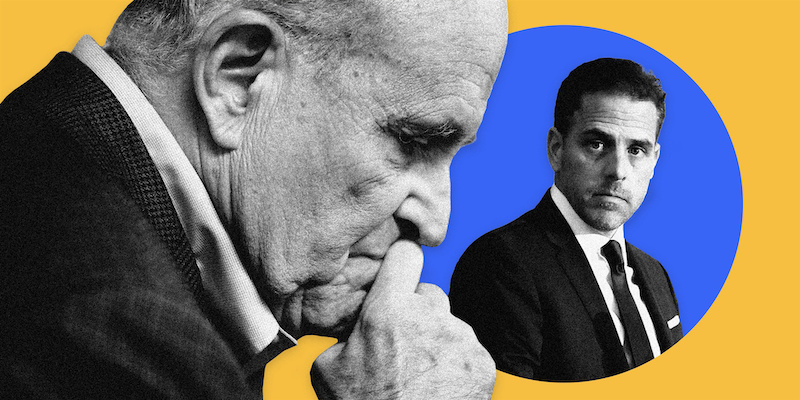 On the eve of the final live debate between Trump and Biden. A former business associate of the Biden family came forward with evidence of the Biden family corruption in China and Ukraine. The man, Tony Bobulinski, a former Navy officer, lifelong Democrat and party donor appeared at a press conference hours before the final debate claiming to have three mobile phones with clear and substantiated evidence of the Biden family corruption. The revelations themselves may warrant a full investigation into the affairs and the implication that Biden was influenced by foreign actors during his time as Vice President and it also perfectly set Trump up for what came later on in the televised debate which Trump comfortably won. Biden 2-4 Trump.

Trump may have come out on top in the scandal war so far and the live debate, but he is not leading in the polls right now. There is an optimism amongst Democrats that Joe Biden has done just enough in the campaign to get people to turn out and vote for change. While Trump on the other hand is championing the silent majority, who came out late in 2016 to upset all the polls and seal victory.

We are so close to the end of this American circus and I am not yet convinced which candidate has the votes to win it but I am expecting at least one more twist in the story before we get to November 3rd. So, next week we will break down the basics of Trump vs Biden, their policies, their promises and of course my prediction for the win!