That particular game is mostly remembered by England fans for the infamous ‘Hand of God’ goal: the diminutive Maradona fooled the officials and broke English hearts when he punched the ball into the goal whilst challenging Peter Shilton, the England goalkeeper. Shilton and the English never forgave him. In Ireland we loved it. However, the second goal which was scored in the game is arguably the greatest of all time. Maradona collected the ball inside his own half and with a little drag back and pirouette he skipped away from two English midfielders, he darted toward the English goal somehow dribbling flawlessly at speed on the bobbly surface of the Azteca stadium, he went passed another player, then one more as he closed in on goal, under pressure from behind and with Shilton closing the space, he jinked passed them and finished from a tight angle, it was spectacular. That game, in many ways, encapsulates ‘El Diego’. His ability to produce footballing magic and pure beauty contrasted with the ugly side. He was his own fairy tale; he was the beauty and he was the beast.

As 1986 and the subsequent VM in Italia ’90 had come a little early for me to witness with any real understanding, it was World Cup ’94 (when I was 10 years of age) that I was finally going to see Maradona for real. USA ’94 is fondly remembered here on Swedish shores for that phenomenal team which brought the bronze medal back to Sweden – Larsson, Brolin, Dahlin and the prolific Kenneth Andersson lit up the tournament and surprised many by finishing 3rd. It was a VM in which Argentina were one of the favourites and a 34 year old Maradona was primed and ready for what was expected to be his last big tournament. I can remember it like yesterday, his goal in their opening against Greece and the wild celebration as he ran toward the camera screaming and wild eyes bulging. His following game against Nigeria would prove to be his last at a VM. After setting up both goals in the game, he failed a drug test and was sent home in disgrace. It was hard for a child to understand and I didn’t want to believe it. I never stopped loving him and so I believed him when he said it was an energy drink given by a personal trainer that caused the controlled substance Ephedrine to be found in his system.

He was still an idol of mine and I still loved his story, he came from nothing, playing with balls made from rags on dirt and being significantly smaller and weaker than the rest he somehow become the best in the world. He left Argentina at 22 to join Barcelona for a world record fee of $7.6 million and after two years, 22 goals, a broken ankle and a vicious mass brawl on the football field he shocked the world and departed for relative footballing unknowns Napoli in summer 1984! 75,000 fans packed into the stadium in Naples to welcome Maradona and he was considered the Messiah immediately. The Messiah did not disappoint as he led Napoli to two Serie A titles, a UEFA cup, 2 Coppa Italia wins and a couple of runner-up finishes in the greatest period of the clubs history. Like he had done with Argentina in 1986, he had once again shown that he could almost single handedly transform a team by himself. The beast would once again return however and, as it later transpired, the deal which took him to Naples involved the Camorra (a Mafia crime organisation) and had come with many strings attached and too many temptations. The lifestyle of excess, women and chaos overshadowed the latter part of his time in Italy and he ultimately left in disgrace after serving a 15-month ban for testing positive for cocaine. 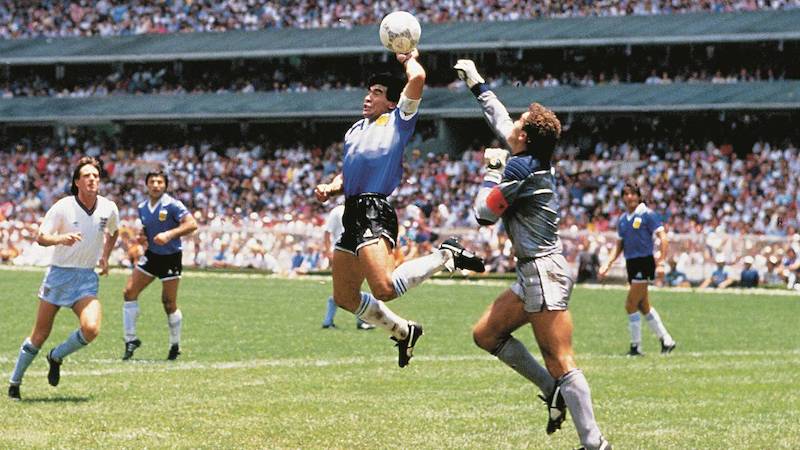 Unfortunately, drugs have ever since played as much of a role in his life as the football but it is for the football that he should be remembered. I think if he was born 20 years later, he would not have fallen victim to the ugly side, the support that players receive today is so much greater and football is so much better prepared for protecting players from these pitfalls, largely due to the tragedies of Diego and Ireland’s own Georgie Best. It was alcohol that robbed Best of his footballing prime and it wasn’t unnoticed that Maradona left this world on the anniversary of George Best’s death. Three days of official mourning were announced in Argentina as the nation has lost their prodigal son. There will never be another like him.

True talent is obsession and Maradona was absolutely obsessed with football. He still was right up until his death, he was a player, he was a coach but most of all he was a fan of the game, he loved football and football loved him. Remember the goals. Remember the talent. Remember the beauty.